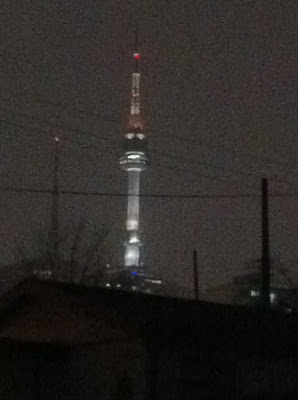 A photo I took of Seoul Tower from my barracks

Woke up this morning and planned on doing some cardio for my workout. I went to the gym which is right across the street from my barracks pretty much. This was the first time I've been in it, so of course I had to input all my info into the little machine at the door before I could go in. Once I was processed in, I went in search of a treadmill. Sadly the gym has no treadmills! They do have some bicycle machines and some elliptical machines, so I tried out the elliptical, which I don't really care too much for. I think weather permitting I'll just try running outside for my cardio days.

Speaking of the gym our sergeant said we all have to meet at the gym tomorrow on Saturday because two of our guys failed their PT test. Since we are a team we have to go in together. I didn't have anything planned and if we end up playing some basketball it could turn out to be fun.

The day started off pretty slow. The specialist that is training me (I can't keep calling him that…from now on his name is SPC Short) came in very late. He had to help out with a PT test I think. So during this whole time I just sat and read the newspaper at his desk.

The day was pretty slow. I was able to finish some online required training to get setup on the computer systems in the office. I was also able to turn in all my TA (tuition assistance) paperwork at the education office as well. I am now in the system and ready to start school. I should have a counselor contacting me within a week or two to get started. I can't wait, this has been a goal of mine for years and I have put it off for a long long time.

I had to find out a little more about the KATUSA today because I wasn't quite exactly sure how exactly they work out. A KATUSA is a Korean national that is in the ROK (Republic of Korea) army. It stands for Korean Augmentation Troops to the United States Army. They volunteer to be a KATUSA. I guess they have to take a test on their English and receive a minimum score in order to volunteer. All the volunteers are put in a database and chosen at random according to a ROK soldier I was talking to. A KATUSA helps out the US Army, they wear ACUs but with a Korean flag, and they report to the US commanders. Even though they report to the US commanders, they still attend ROK meetings and such. All Korean males have to serve in the military for two years and being a KATUSA serves this purpose as well. Our KATUSA seems like a nice kid. He's 22 and actually went to Ohio State University for his schooling. He works his butt off too!

The 11B (infantry) people stationed here at Yongsan started a drill today. They surrounded our office building with razor wire and closed most of the entrances and exits to get to the office. They setup a perimeter and then stood guard and checked everyone's IDs and bags. There are hummers and machine guns setup and they are all in full battle rattle. I saw them eating MREs for lunch. I heard they are going to do this for 24 hours straight. That sucks for them! It was raining when I left the office. They also closed a number of gates around the base for the drill, so traffic was pretty heavy trying to get to the couple of gates that were open.

The other specialist in our group (let's call him Special K) took our sergeant to a doctor's appointment today, but forgot to pick him back up. So at the end of the day the sergeant had him do some push-ups in the office…that was pretty funny. Special K is 40, so out of the junior soldiers I'm not the oldest! I was then given my first safety brief in my new unit. It consisted of SPC Short telling us to be careful this weekend especially if going off post. He made sure we all had each other's numbers in case something happened. Our sergeant then told the specialists to recite the NCO's creed. Then all four of us had to sing the army song and recite the soldier's creed. We didn't sound too good singing the song, so he had us do it again. The same thing happened with the soldier's creed…lol.

Now I'm at the food court using the free wifi before heading over to the movie theatre to watch The Tourist. Love that the movies here are free!!!!