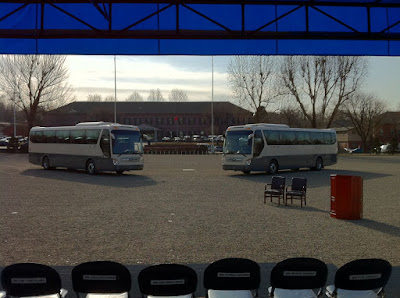 This morning was a little crazy. We went in to get a meeting all setup and there seemed to be a lot of miscommunication between departments on how it was supposed to be setup. It turned out getting SPC Short a little snappy and our KATUSA getting yelled at by him. In the end what happened was the brass attending the meeting didn’t communicate what they needed and at the last second told us. Not good, but you always have to keep the brass happy.

While hanging out in the office today a sergeant who had been on leave since I arrived came into our office. She works in the admin section which works closely with our office. She came in and saw me and asked who’s the new guy. She then found out I was a 25B and immediately she said she is going to take me and move me to her office. I guess they really need a 25B down there. I may actually work on computers if that does happen.

Later on a guy who works in the admin office asked if I could give him a hand picking up all the mail. I said no problem and we took off. He mentioned that he heard I was (or may be) moving to his office...lol. Funny how fast rumors spread...or maybe that sergeant has some pull. We drove a GOV (a government vehicle - Government Owned Vehicle). Every time we stopped somewhere the guy had to write down the time and the mileage. I guess the bean counters keep an eye on that stuff down to the minute.

The big deal of the day was that there was going to be a ceremony in front of our building. The Hyundai CEO and a bunch of their directors and such came rolling up in about 6 black sedans. Hyundai was giving the US Army Forces Korea two Hyundai luxury buses. This is the 60th anniversary of the end of the Korea war. The buses were a thank you to the US forces here for helping keep the peace and protect South Korea. During the ceremony I was in charge of directing traffic...making sure nobody tried to drive to where the ceremony was taking place. I was very glad that I had the chance to visit CIF yesterday and pickup all my cold weather gear. Even with the polar fleece , gloves and my PT beanie it was cold! Fortunately the ceremony didn’t last too long, just long enough for the CEO and General to exchange many thanks. All the people that came in the 6 sedans just had their drivers keep ‘em running with the heat on and when the ceremony was over, they walked very quickly to their cars and took off. It all lasted about a half hour. Just another day in the life of a 25B who didn’t touch a computer. I did get to wear a big shoulder band that made me look important though!