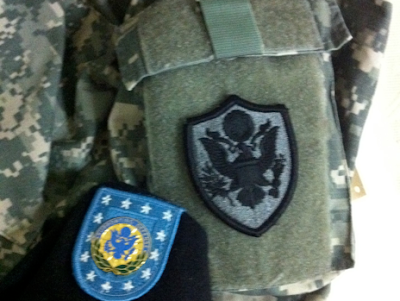 My new unit badge and flash on my beret

Today started out very similar to yesterday except before we left to the DFAC for breakfast, we had to turn in all our linen and also bring all our packed bags down into a storage room. Once the bus took us to eat and returned us, we all grabbed our bags and loaded them on the bus, which then took us to the incoming soldier receiving center…the place where we get all our briefings. Today we had no shortage of briefings. There were so many that I didn't even try to remember all of them. The two that I do remember were the MWR briefing (all the fun and recreation that is provided) and the education center briefing (where we go to get our education on). After so many PowerPoints I think my brain just shut off.

After all the briefings they called a number of names and told them where they were going and a bus came and picked up a number of people. There were a handful of us left and one by one each person was called and told there was a person coming to get them. The private calling the names looked at me sitting there all alone and said "you're name hasn't been called yet?". I said no and showed her my orders. She asked me to wait in the break room with some others that were already in there. Finally a sergeant came and called off everyone's name (except mine and told them to get their bags and wait outside for their rides). I asked her about me and she looked up my name, then said "oh you get your bags and wait down there as well…SGT so and so will come and get you". So after waiting with my bags watching each person get picked up before me, the sergeant came over and asked me if I was still waiting……um yes…yes I am. She said she would call and make sure they were on their way. I still had no clue where I was even going.

Finally my sponsor came (a specialist whom I will be eventually replacing). He picked me up and drove me to show me where I'll be working. Turns out I'm going to be working with a bunch of generals and too many officers to shake a stick at. I'm not too excited about that. In fact I'm very nervous…almost to the point of freaking out a bit. I met so many people my head is spinning. There were a lot of people surprised that a PFC was going to be working in there, I guess they don't get a lot of Privates working in there…that doesn't help. I can't keep all the names and ranks straight. To make it worse I'm in a joint environment, so not only do I deal with army, I deal with air force and Korea forces as well. I may even deal with the navy too, I wouldn't be surprised.

My head is spinning, I was kind of looking forward to working with a number of other 25Bs in a shop or something, but instead I'm doing this. My sponsor had to tell me a couple of times to relax a bit, I guess my was looking a bit nervous. After this mini tour, I was taken to get my room assigned and also my unit patch and flash for my beret. We then dropped everything off in my new room. I have a Korean roommate (there are a number of Korean's who are in the army helping out the US on post). This is going to be so much better than rooms with 4 to 12 people in them. We have our own bathroom and the guy seems like a quite person. Perfect! I had to run to the PX and pick up all new linen because it is not issued for barracks people. There is an unexpected expense…grrrrr. When I got back to my room I unpacked and settled in a bit. That felt nice. We have a refrigerator a microwave and plenty of space for the two of us. This is going to be so much better than my previous living arrangements since I've been in the army. The only bummer is that there is no wireless internet available. We can call and order an Ethernet line put in, but it is pretty expensive (around $60 a month I hear). So for now I'll just keep coming to the food court and using their free wireless internet. 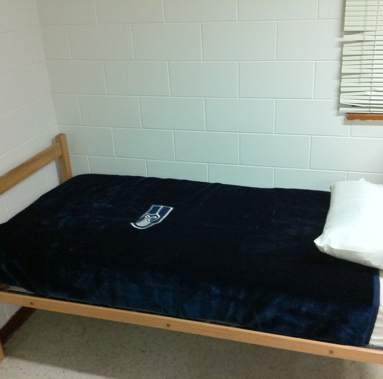 My new bed....what’s that??? ....a Seahawk on my
comforter? Why yes it is! I found this lonely comforter
all the way in Korea a long long way from home.