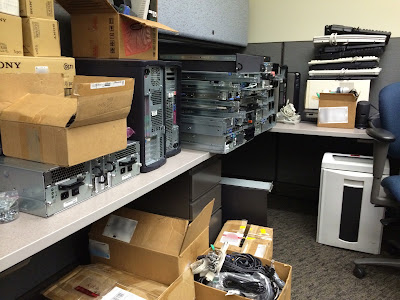 This morning I sent my squad leader a text “MOU Today”, then headed to the naval shipyard in Bremerton today. I checked my army and navy email, then logged out pretty quickly. Two co-workers and I took a TMP and headed to the sub base outside of Silverdale. Once there we headed to a building I guess the IT department once occupied with their SIPR (classified network) server room. The server room was similar to the vault we had at our ComSec office in Germany. A large door with a combination lock on it keeps everyone out except authorized personnel. There is another department or contractors that want to make use of the room, but we still had quite a bit of old equipment and other various “stuff” in the room. From what I can tell there were some that held on to the hope that "if we left stuff in there, we could keep a claim on the room"…guess that didn’t work, but now my 2 co-workers and I have to clean it all up.

We first had to remove all the hard drives from the servers, and I removed all the hard drives from their server cases which involved a lot of taking out little screws. We then loaded the servers and a few desktops into the TMP. We ended up filling up the TMP with mostly hardware, but quickly realized we’re going to have to make another trip out here another day. We drove to the security manager’s office at the sub base and had him secure the classified hard drives in his big safe along with a couple spindles of classified CDs. He will destroy the CDs and do whatever needs to be done to destroy the hard drives.

We then drove back to the naval shipyard in Bremerton. Once there we took a break for lunch, then started to unload everything that was left. We brought it all into our office cart by cart. The office is starting to look full again with all this stuff. Now we have to have another person start all the required paperwork that needs to be done in order to get rid of everything. I guess the director has been trying to have this done for a while and nobody has done anything about it for a very long time. I’m glad I could help.

I spent the remaining of the day surfing the web, then left for home to do some schoolwork.