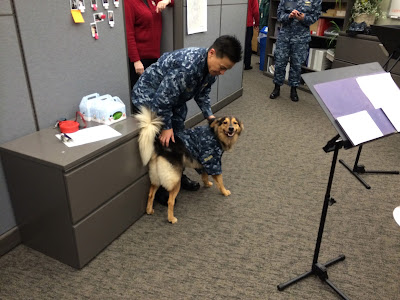 I received a text from my squad leader last night stating that he’ll be on leave until the 28th. With him on leave I figured I should text someone, but I don’t have anyone else’s number, so I just didn’t text anyone. I headed into the naval shipyard in Bremerton. My morning routine was changed a bit because there is an issue with internet access, or I should say lack of internet access. I could only check my navy email via outlook. With no internet, I can’t check my army email which I do through outlook web access. I also can’t check my MEB status or read the news. Now what do I do? I use my iPhone to pass the time.

After a short period everyone is told to gather in a central portion of the building. The regional commander came to visit us. She’s an admiral and she brought her dog (in uniform) and a five piece naval band. The band played a few Christmas songs and then she went around and shook everyone’s hands while wishing us all a merry Christmas. It was a nice gesture and kind of cool. She then left with her dog and five piece band to visit another building. Later our director came around with a Santa bag full of presents and handed out a small present to each of us. I got a box of candy (chocolate covered nuts…which my son later found and ate them all…lol)

I brought in my own screwdriver to get the cases off a few hard drives that I was unable to yesterday with the tiny screwdriver I was given. I had a lot more success with my bigger screwdriver…mission complete! I then completed my inventory spreadsheet for the hard drives and emailed them off to the lady who is doing all the paperwork for everything to be turned in.

I then checked and the internet was working once again. I was now able to use it to pass the time and surf the web. While checking my army email I found that I had a self assessment due for the WTB. The self assessments have me rate the same questions each time with three options which are variations of no problem, minor problem, big problem. The questions range from my satisfaction with my housing to my medical treatment. Any answer other than the no problem requires an additional statement in the comments section. The only two that I always have to comment on are “are my medications working” and “am I still in pain” both comments are usually the same and usually end up something like “my medications do dull the pain, but do not remove it completely”. I can only wish that there were a magic pill to take away all the pain completely.

I left for the day at lunchtime, I went to have lunch with my wife at home because she only worked half a day as well. We both then made the trip to Sultan and watched my daughter’s basketball game. We brought all the kiddos home with us for the weekend. I’m so happy to be able to see them again on a regular basis, that was the one big thing that really got me down while being away from them during my time in Korea and then Europe.