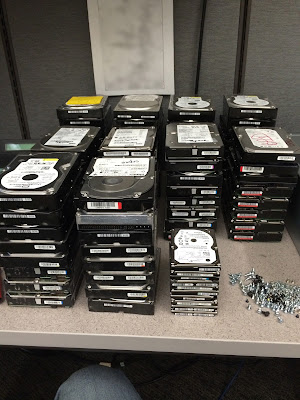 Sent a text to my squad leader this morning “MOU Today”, then head into the sub base outside of Silverdale. I continue with my morning routine of checking my army and navy emails, then surfed the web for a while. At about 0830 or so my co-worker and I headed back to the classified (SIPR) server room along with another co-worker that brought the TMP from Bremerton. We all headed down there and finished cleaning up the rest of the SIPR server room. There was a couple KVM switches still in the racks that we took out along with a bunch of keyboards, mice, and other scraps that we loaded into boxes. We took out a few loads of just trash and cardboard to the dumpsters before filling the TMP once again with the remaining items from the room.

We headed to the naval shipyard in Bremerton and took a lunch break. I headed to my car and ate lunch. We then all unloaded the TMP and proceeded to bring everything into our office. Once the TMP was unloaded I was tasked with removing the cases from all the hard drives. Even though I had done this while in the SIPR server room yesterday, there were a number of hard drives already in our office that needed to be destroyed. So I used a tiny screwdriver that I was given and proceeded to unscrew drive after drive. Once I finished I created a spreadsheet and started the process of logging each drive’s make, model and serial number into the spreadsheet. Hard drives require a little more paperwork before they can be sent off, but just getting rid of all this stuff is a red tape nightmare.

I spent the end of my shift chatting with a co-worker before leaving. I then headed home and did schoolwork.