Back to Ft. Lewis - (MedBoard: Joint Base Lewis-McChord) Day 184 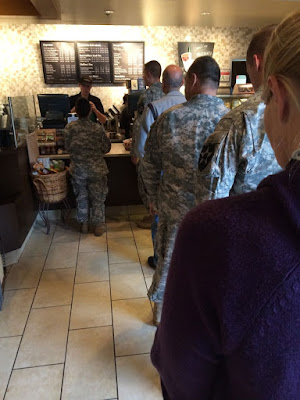 The line at the Starbucks on post can get long at times!

This morning I headed back into Ft. Lewis. I went to the morning formation in ACUs because I was told to see my NCM between 0800 - 1000, and if I have to choose it’s going to be 0800 so I don’t have to do the army PT and then change. The morning formation was extremely cold though and I have no cold weather gear at all. I had to turn in everything I had before I left Germany. Speaking of cold, 4 of us in my platoon had to head up to the company office to do some make up required army cold weather training. Just what I love…some of that great army training! The four of us sat down in the platoon sergeant’s office. One person was at the controls of the computer and brought up the cold weather PowerPoint presentation training. The guy controlling it just blew through all the slides…I’m talking about one page per second. There was barely time to read the headline let alone all the other crap they had on each page. The important thing is now our platoon sergeant can say we’ve been trained and can check that box.

I left and went to my car to have some breakfast. At 0730 when the SFAC opened, I headed in and checked my army email. I then just surfed the web a bit. The SFAC has about 8 computers or so that soldiers can use, I was just staying inside to pass the time and try and stay warm because it’s so freakin’ cold outside.

At 0800 I went back up to B company and saw my NCM. We went through all the usual questions. I let her know that I don’t have any issues except having to drive all the way in here just to see you…lol. I did let her know about a refill I need for my muscle relaxers. She’s gonna have them ready for me so I can pick them up next week when I come in and see her again. She explained that they get audited a lot and they have to see each soldier at least once week, but every once in a while I can do the check in via phone if there is a holiday during the week or something. So it looks like I will not be getting out of making the drive at least once a week for the most part.

I went to the barber and got my head shaved, then went to the commissary to pick up a few things…I gotta take advantage of the times I do make the trip! I then changed into civilian clothes and went to the Starbucks on post to sit for a bit and enjoy a mocha. Since I had to make the trip here I decided to run a few errands as well. The first was a drive to Kent where I dropped off a MacBook that I worked on as a side job. I then made my way to Granite Falls middle school where I surprised my son at his away basketball game. It was pretty cool seeing his face when he saw me. I love taking every opportunity I have and seizing these precious moments in time. I already missed too much while being stationed away. I’m going to make the best of my time now.