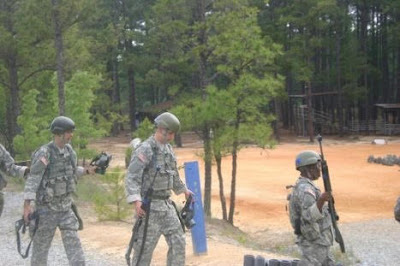 Me on the far left shortly after leaving the gas chamber


These entries are from the letters that Brandon has mailed to me. His writing at times can be a bit difficult to determine his words... bare with me, I do my best, especially with army terms.
After formation and some light PT the entire company boarded those semi trailers (cattle cars) to head out to the gas chamber. When we got there we ate breakfast. For the first time ever, we had plenty of time to eat and the DSs even offered seconds to anyone who wanted it...the first time ever! Only one person actually took them up on it LOL. I think they wanted everyone to get a full stomach to see someone vomit.
After we ate we went over all the safety instructions. Then we lined up for the chamber. The anticipation was high. Everyone has heard so many stories. We lined up with our gas masks on and entered the chamber. It was warm and you can feel your skin tingle a little. Once inside, we had to line up around the wall and as the DS came around, each person had to break their seal and say their last name and last four numbers of their security number. Not too bad… I took a deep breath and said it, sealed my mask again and breathe normally. Then we had to take off our mask, hold it in our left hand, put on our helmet, then hold our rifle in our right hand. I took a deep breath and did it, but the problem is that we couldn’t start going until everyone was ready. I couldn’t hold my breath that long because we had some slow ass people!
My eyes were watering and as soon as I took a breath, I started coughing. It felt like I couldn’t get enough oxygen. My nose started running, then finally we started walking out. A few people threw up once they got outside. It took a good 50 to 100 meters of walking before my eyes cleared up.  They were on fire, even after leaving, but eventually it all cleared up. It was tough not rubbing them.  I made it through! Some who didn’t follow directions once they got out had to get back in line and do it all over again...that would suck big time!!!
When we got back to the bay we had “red phase counseling”. The DS talked to us as a platoon about our strengths and weaknesses. We were informed that the Command Sergeant Major decided not to let the entire company phase to white. This really sucks! I was looking forward to everything being just a little more lax and maybe even a phone call or something. During the counseling, we found out that the DSs don’t “smoke” us, they use “corrective training” LOL.  We also found out that our platoon has the highest PT scores out of the company! I checked and I’m actually 8th best in my platoon.. Not too bad for an old man.
Now we’re cleaning the bay. I did a bunch of cleaning, but now I’m taking a little time to update the journal.
Nicknames – not a whole lot… “Golden Gloves” has been shorten to GG (GeeGee). There is also another guy whose last name rhymes with cock…so he got stuck with that as his nickname.
I finished reading all my letters. Several from my wife, kids, mom and even my grandma! That was very awesome. Letters from friends and family really do help keep my spirits up and keep me going.
Lots of cleaning before and after dinner – clean, clean, clean.
Random Quote: “You might as well call me butter…cause I’m on a roll” (a guy in our platoon, not even sure what he was talking about, but I thought that was funny.)