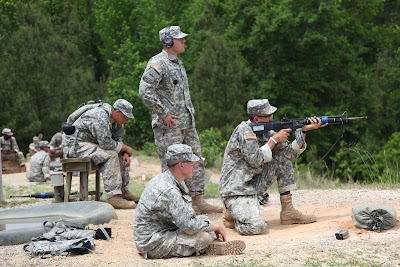 A typical photo with our platoon on the range.
Our cool DS is standing and observing.


These entries are from the letters that Brandon has mailed to me. His writing at times can be a bit difficult to determine his words... bare with me, I do my best, especially with army terms.
Good news! We were told we no longer have to wear Full ACUs with helmets and body armor when doing our fire guard shifts. We now only have to wear our PT uniform (shirt, shorts, and running shoes) and we only have to wake up 15 minutes early instead of ½ hour early. It’s the little things that cam make everything better.
We had a group run today, I still ran in the “C” group, but I may move-up to “B” group next time. I stayed in front the entire way but still got a good sweat going.
When we got back from the run we found our bay trashed by DS A-Hole. At first it looked like several people’s lockers were emptied all over the floor. Then after a little inspection we found it was only one guy’s locker! The DS just took everything out of it and threw it all over the entire bay. The guy had locked his locker, but he left the key in his “smart book” and I think that was left on his bed. I felt bad for the guy. We all helped him get his stuff together, but he wasn’t able to do much because we had to get ready for the range.
We went to a different range today as an entire company. I was able to “zero” on the first try. Last time we went to the range the DS was able to adjust my site, but I didn’t have time to zero. (Zero is when you can hit the “center mass” of a human silhouette target down range. There is a 4 cm circle that you have to hit 8 shots in out of 10). I hit all five in with the first magazine, then I got a little excited and ended up shooting him in the head and throat. After that I settled down and finished the rest of my magazine in the center mass (with on errant shot to the nuts). Only about 60% of our platoon was able to zero. I guess we sucked at it because most other platoons were able to get around 90%.
The army really stresses one shot one kill. Don’t waste ammo. Don’t “spray and pray”. Take your time… aim… and hit your target. This was a little different that I imagine how soldiers would shoot in a real fire fight, but it does seem a bit smarter..
When we got back we cleaned our rifles and were informed by our senior DS that we have another diagnostic PT test tomorrow. He said if the company as a whole does well on it, we would go to white phase. A lot of emphasis is put on PT and marksmanship. I guess since all the other platoons did well in marksmanship we just need to pick it up on our PT test as a company. I sure hope everyone does better. White phase will be better then red phase for sure.
Random DS Quote: “Icy Hot works wonders men… just don’t use it to jack off… I learned the hard way.”
Another clip from the DVD I purchased from basic. This is mostly my platoon (1st Platoon)
as you can tell by the blue colored tape on the rifles. We are still in the process of zeroing our
rifles at this point.