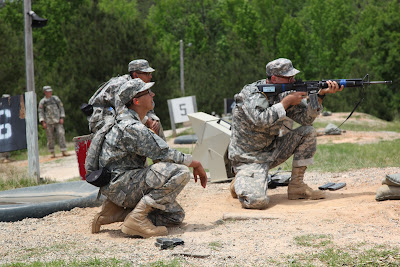 Me in the kneeling position at the range with PFC Metal in the foreground.

These entries are from the letters that Brandon has mailed to me. His writing at times can be a bit difficult to determine his words... bare with me, I do my best, especially with army terms.
Today we woke up and actually did a little running after our normal running PT. 60 second sprints with 120 second walk… repeat over and over. My legs were still pretty worn out from the ruck march. I wasn’t able to give a full 100%.
Since my battle buddy was still AWOL, I had to carry his damn rifle everywhere. It’s bad enough with all the extra crap they make us wear...now I have two rifles everywhere I go.
We had two more cases of the pink eye in the platoon. I get paranoid anytime my eyes itch. I use hand sanitizer all the time and I try not to touch anything if possible.
We went out to the range today and actually got to shoot targets with live ammo. It was a lot louder than I expected. Even with the crappy issued earplugs my ears are still ringing. I was able to group my shots every time, but we didn’t have enough time for me to zero in. Our range time got cut a little short. I’m very close, so I’m hoping to get that done next time we go out.
Somehow 4 of us got skipped during lunch at noon. We were shooting at the time. When we got back we were each given an MRE at 14:00 (2pm). Mine was meatloaf and it was disgusting. Usually I don’t mind them, but this one was gross. It did however have an oatmeal cookie and “toffee rolls” (aka Tootsie rolls). They were in a generic green bag so it wasn’t contraband…and it was good.
My AWOL battle buddy came back today. He actually made it all the way home! That is pretty amazing, he lives in South Carolina. He said after he left the hotel he was picked up by a lady, who actually drove him all the way to his house. When he got home his dad saw him he asked his dad “I’m in trouble aren’t I?” His dad made him call the captain. He was told if he comes back in, then he won’t get in trouble, they will just give him a general discharge and he will be out in a week. The alternative was the MPs would pick him up and he will have jail time. He came back and is now with the platoon for the time being. Unfortunately, he cannot touch his weapon, so that means I still have to carry the damned thing around until it gets turned in.  Who knows how long that will be.
Our bathroom toilets, urinals, showers and shower hooks all got labeled today. Above each of the urinals…”Pisser 1, etc”, on each stall “Shitter 1, etc.”. Not sure why we need them numbered, maybe we can call out “I’m heading to shitter 3, be back soon!”
We had a locker inspection today by DS Midget. He didn’t toss anything, just old us what is wrong and what to change. He’s going to do another one tomorrow.
A lot of people count the days we have left, or how many Sundays we have left. PFC Metal and I count the days by chow time. Each day gets broken into thirds. We are all counting down the hours until the next chow time.
It strange to being cut off from everything. It wasn’t until about 7pm tonight that PFC Metal said “hey it’s Cinco De Mayo”. I thought wow, normally I would be at a local Mexican restaurant having a few margaritas. In basic training it means nothing. Just another day in basic.
No mail at all again today! That freaking blows. I don’t believe for one second that nobody in our entire platoon has no mail Monday, Tuesday, or Wednesday. It’s all just somewhere in an office piling up. That just pisses me off. Everyone is always looking forward to getting mail. It just drags moral down when we don’t get any.
Random Quote: “Isn’t that the gay cowboy movie?” (PVT Cock's reply when asked if he’d seen “Dances with Wolves”)


A clip from the DVD I purchased at basic. This shows the entire process of zeroing your shot.
As you are firing, another soldier is next to you "coaching" you. When finished with each
round of shooting, everyone walks up and has the drill sergeant check the grouping
of the shots and then makes any necessary adjustments to the site on the rifle.
(This clip consists of mostly the Outlaws platoon from our company)

Hi, new on here.  I had a question.  Regarding the infamous morning dump, did you have any guys who couldn't squeeze it out and it came on all of a sudden out in the field or during formation.  In that case what would they do?  Can they just leave formation or exercise to go drop one?

LOL...we never had any "accidents" in our platoon and I didn't hear of any in the other platoons in our company. There was a guy in another platoon who actually got a "shitting profile". (A profile is basically a doctor's note that allows a soldier to not do a certain physical activity - say running for instance if the soldier has a sprained ankle or something). This guy was able to get a note from the doctor that basically said he is allowed to go to the bathroom anytime he needs to.

LOL. The reason I asked is because I am a pretty regular person and when it has to come out it has to come out so I was just trying to find out if anyone did have to ask to go to the latrine in the middle of formation or exercise and how they went about asking and were there latrines readily available

And btw this whole journal was very informative..

People would ask all the time. I think it all depended on the drill sergeants mood at the time if they decided to let the person go or not.