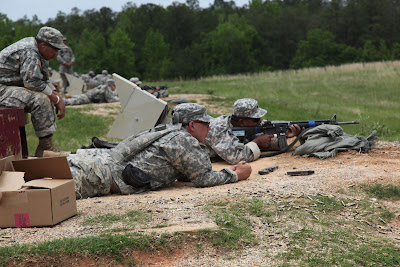 A photo of our platoon at the range. The shooter is in the prone position, while
the "coach" is watching the shooter to make sure proper technique is used. Finally
the guy sitting in front of the computer screen can see where the bullet hit and call out
any adjustments that need to be made.


These entries are from the letters that Brandon has mailed to me. His writing at times can be a bit difficult to determine his words... bare with me, I do my best, especially with army terms.
The day started off with a PT test first thing in the morning. This was an unscheduled PT test, just to see if there was enough improvements in the company to phase. (The other half of the equation for phasing in their minds was marksmanship, which we all did well yesterday.) I don’t know my exact numbers, but I think I improved in everything. They should post the results tomorrow I think.
After the PT test we changed really quick (used another field shower kit) and ate breakfast. After that we took off to a new range.  We used real ammo, but there is a computer at each firing station, which will tell where on the target you hit, or where you missed. Instant feedback. I sucked big time when I first went out there. I was sweating and hot,  this made my glasses fog up big time.  I couldn’t see anything. To top it off my rifle was jamming like crazy. I cleaned it well, but evidently I didn’t use any of the oil. (Some DSs tell you use it, others tell you to use very little.) So the DS lubed my rifle quick, it didn’t help with that round, but it seemed to help later on in the day. It was either that or maybe just a bad loaded magazine?? After lunch we shot again. This time at targets that popped up behind little hills. They were 30 meters,  175 meters, and 300 meters away. This time I had a lot more fun. My core was cooled down from the PT test earlier, plus it seemed to cool down outside a little. I had no issues with my glasses, so I could actually see my targets.
After we were done the First Sergeant gathered the company around. He said this last week the company has shown a lot of improvement. We then had a little ceremony where the DSs changed the flags of each platoon from red to white. Yahoo!!! We are now officially in white phase. The DSs will start to give us a bit more privileges. Hopefully that will include phone calls.
When we got back to the bay, the DSs called a meeting. They told us that our platoon has “duty squad” next week. The DSs picked out 8 or 9 individuals from our platoon to be the duty squad from our platoon.  The DS tried to tell us all that it was a privilege to be in duty squad. I asked a guy in another platoon, who is in duty squad, what kind of privileges he got. He said, “It sucks. I am just a maid. I have to get up early and stay late. There are no special privileges, just more responsibilities.” The duty squad always does the set-up for whatever the company is doing and they also serve the food when we are away from the DFAC (Dining Facility).
The DSs also said that with white phase comes platoon leadership. They assign a PG (Platoon Guide a.k.a. the platoon leader), an assistant PG and 4 squad leaders. They also told each of the squad leaders to pick an assistant. When they were picking squad leaders they actually chose me for the third squad. They asked if I would be able to sound off (I’m normally a quite guy). I said “Yes, Drill Sergeant”. I guess I didn’t say it loud enough. They said, “You’re fired” – LOL! Shortest time being a squad leader ever I’m sure. No worries, my plan was to lay low during basic training. All these positions come with a lot more responsibilities, but nothing else. In my mind it would just e a big pain in the butt!
Another great thing happened today! My battle buddy’s rifle finally got turned back in at the end of the day. Even though my battle buddy is back, he’s not allowed to have his rifle. (Since he’ll be going home soon anyway.) So lucky me had to carry it every moment since he left to go AWOL. I’m so glad to get rid of that thing. It was a real pain in ass at times.
It finally happened, I figured from day one it would, that I would get some sort of old guy nickname. The DSs now call me either “old man” or “grandpa”.
Random DS Quote: “Stop squeezing your ass men…I don’t want to see that shit!”