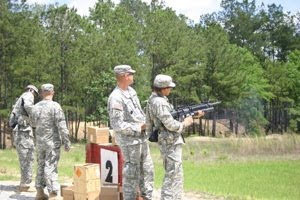 These entries are from the letters that Brandon has mailed to me. His writing at times can be a bit difficult to determine his words... bare with me, I do my best, especially with army terms.
This morning we had another GAR (group ability run). I decided to move up to “B” group. Last time in “C” group I barely broke a sweat. This time in “B” group I was drenched in sweat. (and rain from earlier). It was a much faster pace and longer distance. It pushed me a lot harder; in fact I ended up at the back of the group (not counting the ones that fell out).

After breakfast we went to a range where we learned all about the AT4 “A fully contained, light weight, man-portable, right shoulder fired anti-armor weapon”. Kinda like a portable rocket launcher. Everyone has a chance to shoot small tracer rounds from them for practice at some old tanks on the range. That was pretty cool, but what was really cool came next. Our best shooter in qualifying for our platoon and another platoon actually got to shoot the real thing. The other platoon's guy shot & hit the tank. When our guy shot, he hit the tank too...that was pretty cool!
After that we ate lunch (MRE) and then got transported to another range. This range was for the M203 (It’s a grenade launcher that can attach to a M16 rifle). We learned all about it and then everyone had a chance to fire 8 dummy grenades. When they hit the ground they gave a puff of orange smoke. Still pretty cool.
They picked the best shooters from the other two platoons and they got to shoot the real thing. The DSs were joking telling everyone to duck after they shoot because shrapnel may come back at us. The first guy shot & BOOM!!! (big bang). Right after the hit, a DS behind the bleachers threw a bunch of pebbles on the metal roof. Everyone almost pissed themselves and ducked for cover. It was pretty funny.
After that we had about an hour and a half to kill before transportation. The strangest thing happened. All the DSs, the 1st Sergeant, and the Captain hung out in front of everyone and started asking everyone for good jokes. When the privates started running out of jokes, the DSs wanted us to start doing impersonations of the DSs. It was pretty funny. It then turned into funny stories from the DSs. Very laid back and a lot of laughter.
After dinner we had to pack for our FTX tomorrow. FTX = Field Training Exercise…aka camping army style. Not really excited for it. We are going to have to a do a number of drills and exercises. Make our camp and worst of all pull security all night with a battle buddy. (Every hour one stays awake & one sleeps, then switch). I can’t imagine the food is going to great either. MREs and maybe duty food. MREs don’t really fill you up, they just tide you over until the next meal. Not sure how much time I’ll have to write…we’ll see how it goes.
Random DS Quote: “This is the first time you guys have impressed me. You must make your boyfriends happy.” (DS A-Hole after watching all of us suck down our milkshakes the other day.) 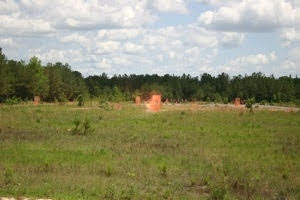