A whole lot of shooting going on (Basic Training) Day 34 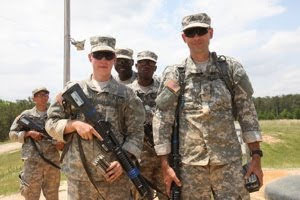 On the range...I'm on the right with PVT Pink Eye on the left

These entries are from the letters that Brandon has mailed to me. His writing at times can be a bit difficult to determine his words... bare with me, I do my best, especially with army terms.
This morning started off with a group ability run. I decided to stick with the “C” group one more time. To tell you the truth, I just had no desire to run this morning. So I didn’t feel like making the jump to the next group. I need to though; I barely broke a sweat with the run this morning. I do want to improve my 2-mile  run and the only way is to push myself more during the group runs we do.
Today we went back to the same range as yesterday, the one with the computers that show where or if you hit the pop-up targets. I must’ve shot close to 200 rounds. We added the sitting position where you kind of get on your right knee and sit on your foot. We also shot laying down with sand bags supporting he rifle (prone supported) as well as lying down with just you supporting the rifle (prone unsupported). The targets also could come two at a time. (One in the front, middle or back at the same time.) We would have to shoot the closer one first (because it stays up less time) and then the one in the back. This changed the way I had to aim. Both eyes open to see what targets popped up then close one eye…aim…fire…aim…fire.
I did OK. I failed on a couple and passed on a couple. I think the different lane conditions played a big role in how I did. I also did better in the sitting position once I found a comfortable way to shoot. Shooting is a big part of basic, if you don’t qualify, then you don’t graduate! Not sure yet when we will actually qualify, but I believe it is sometime later this week.
After each day at the range we have to line up for a shakedown. No shells or live ammo is allowed to leave with us. We line up and empty everything from our pockets (these uniforms have many). The DSs then came around and pat everyone down. When they come up to you, you have to sound off with “no bass, no ammo drill sergeant.”
We got back took a shower and ate dinner. Then we cleaned up the formation area (CTA) and the company laundry rooms. After that we cleaned our rifles. Now that we have platoon leaderships (this is actually 1/3 of our entire platoon if you count all the assistants) they have started taking charge. They do a lot of delegating, but I don’t see them actually doing much. LOL. Unfortunately, I think the power has gone to some of their heads. We’ll see how this all plays out.
Random DS Quote: “Why are you calling me by my name? Are you my goddamn buddy? Are you my fucking wife?” (After a private used a DSs last name – this is forbidden, we can only call them drill sergeant.)