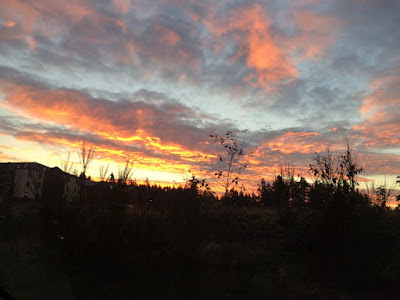 Sunrise this morning at Ft. Lewis from my parking spot...unfortunately
I was driving and couldn't take an amazing view with Mt. Rainier
in the background a few moments earlier.

This morning we had our morning formation at 0830 in ACUs. I arrived and was thankful to be able to sleep in a little. Our first sergeant arrived in front of the formation and I guess wanted to stroke her ego or something. She had everyone who was on profile that cannot do push-ups move to the back, the rest of us had to start doing push-ups. Doing push-ups is fine, but it just pisses me off when people have to strut around and show people who's boss.

My mood worsened when after formation we broke up by platoons and I was voluntold to clean the stairwell in the barracks along with another soldier. I was pretty pissed off. All I did was just glare at the NCO while he was instructing us what to do. What made it worse was that I was really looking forward to my coffee that was waiting for me back in my car. Instead I have to clean up a stairwell in a building that I don't live in or ever use…but that is the story of my army life…cleaning up after others it seems. The other soldier quickly volunteered to do the sweeping leaving me with mop duty…this morning just keeps getting better.

I do the cleanup and then head to my car where I finally have my coffee. I get a text shortly after from my squad leader telling me I have to sign my appointment slip at his desk. Stupid new rule. I head up and do that, then head to Starbucks on post, get a coffee and hang out in their lobby with my iPad making use of their WiFi. I needed to get away from the WTB for a little while. After that I headed to the JAG office to inquire about electronic repair estimate forms that the moving company needs me to have filled out because they broke a few things during the move. The JAG officer gave me the forms, but said if there is no physical damage evident that "the little elves inside electronics just die sometimes" and I will not be able to get reimbursed for the damage. They broke a 2TB external hard drive of mine and a pair of Bose wireless speakers. Both are not cheap, and now I realize that I will probably not get reimbursed for them. They worked fine in Germany before they were packed up and shipped here by the movers. That just pisses me off.

I head to Subway for lunch, then hang out some more in the lobby with my iPad. I head back to the WTB and wait in my car for a while…taking a small nap. I then went to my hydro massage appointment at 1500. The massage was great as usual. When I left I saw my company all getting in formation, there is no way I'm going to join them…I just head to my car and head home. Luckily I'm enrolled in class, so I don't have to attend any evening formations even if I'm not working with the navy.

I get home, do my schoolwork, then prepare for the weekend!