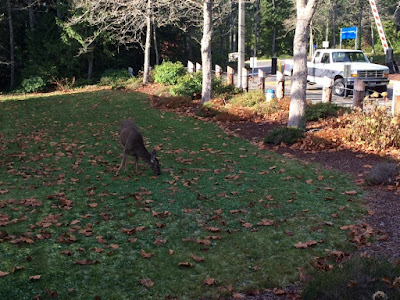 First time at any job where I've left the office and found a
deer just chillin' eating some salad.

This morning I sent my squad leader a text “MOU Today” and then headed to the naval sub base near Silverdale. The I.T. office isn’t really an office. Instead it is a server room that also has some desks in it. I’ve never seen anything quite like this before in all my years of doing I.T. work. Because the “office” is in the server room it’s louder than normal because of all the fans running in the servers and also a little bit colder than normal because the A/C in the room has to keep it cool enough so the servers don’t overheat. As I was walking through the server racks I noticed one lone Mac Mini sitting among these giant HP and Dell rack mounted servers. My co-worker didn’t know what it was there for, now I’m curious.

My co-worker and I headed across the street to the naval regional 911 center once again to try and get the computer working. We tried until lunch time, but gave up and headed back to the office with one of the broken computers. My co-worker has put in a help ticket to the vendor to see if they have any idea why these two lone computers are not working.

I ate my lunch in the office today and then continued working on the broken PC. My co-worker and I have both tested and tried everything we could think of to get the program to run in the browser, but there is something with the ActiveX control that just doesn’t work…and it’s very frustrating. I ended up testing various ideas on it until it was time to leave for the day.

I headed home and did schoolwork and then went to the YMCA for a workout. I’ve been doing cardio, but figured I need to mix it up with a little strength training now as well. I could tell right away that I’m definitely out of shape! I started out using the universal machines that I used while in Germany, but at about 50% less weight to start out with…and I was straining! I gotta get back in shape, but with the holidays coming up I’m sure we won’t have a normal routine for a while.