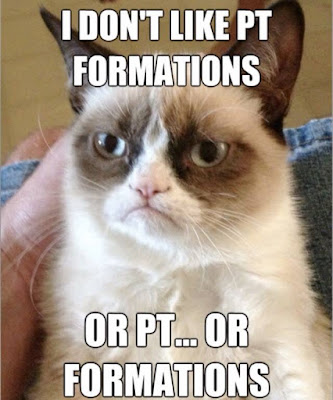 Yup...that pretty much sums it up (at least army PT anyways)

Headed to the morning formation and boy it’s starting to get cold. Even though I was in full winter PTs, I could still feel the cold air all over. After accountability the first sergeant released us by platoon. Everyone else headed in except for our platoon. For some reason our platoon sergeant wanted to stay out in the cold and do our stretches and exercises. I don’t care too much for when we get released by platoon because I can’t easily sneak off when we are released and just leave.

Once we finished our stretches and easy exercises we were supposed to walk around the WTB complex a few times, but I just headed straight to my car…I was getting pretty cold by this point. A lot of the exercises we did earlier to get the blood pumping were ones that I just can’t do…a lot of us couldn’t do because of the various injuries that brought us here.

I ate breakfast in my car, then went into the SFAC to check my army email. I then used their bathrooms to change into my ACUs. Once changed I hung out for a while in the lobby just to stay warm until my next appointment. I headed to my monthly PCM appointment and we went over how I have been doing. For the most part I’ve been doing pretty good. I’ve been using the traction device nightly and I have been taking less medication as a result. I still get pain and headaches, but they seem to be less frequent and less severe than before which is a good thing. I had my PCM get me refills of my pain medications, then headed to the pharmacy to pick them up.

After that I hopped in my car and headed home where I finished up the day doing schoolwork.