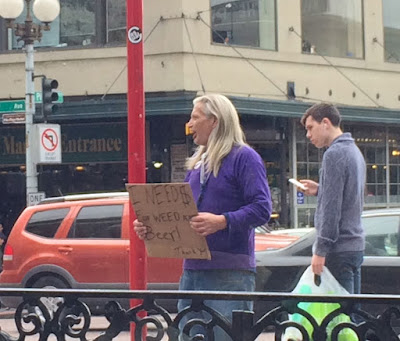 Saw this guy outside of Starbucks..."I need money for weed and beer"
Hey...at least the guy is honest!

This weekend started off with getting my wife’s hair cut. Normally this isn’t a big deal, not even big enough to mention on a blog. This haircut is a little different though, her hairdresser moved and started working in Seattle. My wife is a little picky and after one attempt with another local hairdresser, she decided she needed to head into Seattle. Living in Bremerton has a great advantage when it comes to visiting Seattle, we can just hop on a ferry which will drop us off right in the middle of downtown Seattle. When we arrived at the ferry there was an unusually large amount of people waiting for it. A quick look around the crowd and I realized that there must be a Seattle Sounders game today. There were a ton of people in their Sounders gear. I like how the color scheme of the Sounders is similar to that of the Seahawks. I’m not a huge soccer fan, in fact I would change the channel if it was on TV. To me it’s kind of like baseball, I would not watch it on TV and I do not keep up on the standings…but I do enjoy the occasional game in person. I haven’t seen a Sounders game yet, but I do think it would be fun to go see.

When we arrived in Seattle after the hour long ferry ride, my wife and I walked to her hairdresser’s salon. I said goodbye and then made my way a Starbucks located near Pike Place Market in Seattle. I only purchased a bottle of water, just to justify my use of one of their lounge chairs. I got comfortable and started spending some quality time with my iPad. Between the use of my iPad and just people watching in downtown Seattle, time passed by pretty quickly.

Once my wife was finished we met up and decided to eat at the Hard Rock Cafe in Seattle. Neither of us had ever tried it out yet and we were both starving. Dinner was great! After that we left, boarded the ferry and headed back to Bremerton.

Sunday was very laid back. It consisted of sleeping in, doing schoolwork, watching some basketball and finally visiting the in-laws for dinner and laundry. We still don’t have our own washer and dryer. Until I get out of the army and get a real job, we don’t want to add any additional debt to our budget.