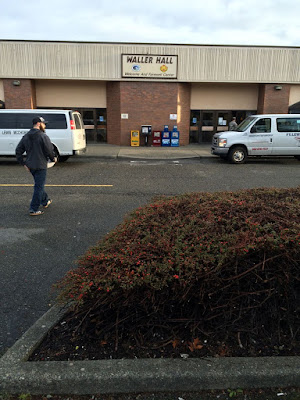 Waller Hall...where all the transition processing of thousands of soldiers is done

This morning I headed to formation as usual. I sat in the WTB parking lot until about 15 minutes before formation and then slowly made my way to our formation. When I arrived there was nobody there. At first I was a little pissed off because I didn’t receive any notification of a formation time or location change. I then realized it’s Tuesday…and formations on Tuesdays are at the gym. I guess that kind of shows you that my mind is kind of out of it.

It’s too late to make it to formation at the gym, so I just head back to my car, pull up my blanket and try and sleep. Unfortunately it’s way too cold to get any sleep. Even with my blanket it seemed the freezing cold outside just slowly creeps in my car and right through the blanket. I listened to the radio for a bit and ate my breakfast. I headed into the SFAC at around 0800 and checked my email. I then headed to Waller Hall and hung out in the lobby for a while, at least it’s warmer in there.

I have a 1000 transition brief, so I started wandering around trying to figure out where exactly the brief was. Waller Hall is the location everyone does their in-processing and out-processing. It’s fairly large and even has a Starbucks and a Subway located inside. I started looking around and didn’t see anything that said transition or transition brief. I finally went to the out-processing station and asked them if they knew where the transition brief is. They had no idea what I was talking about, in fact they really didn’t even want to talk to me unless I had my orders and my leave form. I gave my PEBLO a call to see if she could steer my in the right direction, but I only got her voice mail. By this point I was getting pretty frustrated. It wasn’t until I made my way to another portion of Waller Hall that I found what I was looking for. I came up to a desk that had a sign in sheet for medical retirees. I found out once I signed in, that the transition brief (or TransProc brief as I heard others call it) was not until 1100. It was about 0945 and I didn’t have anywhere else to go, so I just took a seat in the waiting area. I don’t really mind that it’s an hour later than I was told, I’m just glad I finally found out where I needed to go.

A half hour before the brief everyone had to sign in on the TransProc brief form. Once signed in, we headed into the conference room. I took a seat up in the front because I didn’t have my glasses on and I wanted to make sure I didn’t miss anything important. Right before we started the brief, the instructor passed out a packet of papers to each of us. This individualized packet included our ERB, a checklist, a leave form, and some other miscellaneous items. The brief was very informative. The briefer went over each of the forms that we had and had us look for any errors. One of the forms had our final out date, which is 90 days out from when each of us was placed on TransProc. The checklist went over each item that we needed to obtain and bring back in order to get our orders to final out. In total the meeting lasted about an hour and a half.

I ate my lunch in my car as I drove back to the WTB. Once there I went into the SFAC and used their computers to print out some of that required documentation needed in order to get my orders to final out. Going down the checklist I needed the following:

DD Form 2648 - ACAP Checklist signed and stamped by ACAP office and signed by me. I was able to get this form from ACAP earlier once I found out I was on TransProc. I took it to get signed by the commander as soon as I got it, so this form is ready to go.

DD Form 2958 - ACP form that is signed and stamped by the ACAP office and signed by me. I was able to get this form as well earlier when I saw ACAP after getting on TransProc.

DD Form 93 - Record of Emergency Data. I was able to print this off from my records on AKO.

SGLV - Service Members Group Life Insurance. I was able to print this off from my records on AKO.

Military Transcript - I was able to print this off from my records on AKO.

By this time lunch break was over, so I gathered up all my paperwork and headed to my S1 office. My squad leader had told me earlier who to see at S1 once I was finished with the TransProc brief. He also said to see him after I see S1. The S1 office had just come back from their lunch break and I was able to be seen right away. In fact the lady I wanted to see was actually expecting me. I was a little surprised by this, because nothing seems to work smoothly in the army. I thought I was going to have to explain what I was doing there, but instead the S1 lady took care of everything. She had a packet with my name on it and added all my paperwork to it. She was surprised I had everything ready for her.

We then looked at my end date, which was June 3rd. She said we should move it to May 27th because this will allow me to actually get on the June retirement list, otherwise I wouldn’t be added until July. We then looked at my leave that I had accumulated. I had already printed off my LES statement while in the SFAC, which shows my leave balance. I am at 37.5 at the end of February. The S1 lady went over accumulation that I would get until I am out…which is 2.5 days per month. This will add almost 7.5 days to my leave remaining. I will also get another 10 days of permissive TDY (PTDY) leave, which is free leave that can be used to find a job. If leaving the state we can get an additional 10 days that can be used for moving. After the math and trying to account for the average of 20 days it takes to get orders processed, we came up with the dates I will be using. On April 14th, I will go on terminal (transition) leave. May 27th will be my last day in the army. I will end up with around 10 days or so of leave that I will not use. This will be sold back to the army and I will get paid out for it on my last paycheck. While this sounds good, it’s actually better to use leave instead of selling it back. When used, I receive all the other entitlements such as housing allowance and food allowance. When leave is paid out, it is only paid out at the basic pay rate…which is quite small.

Surprisingly since I’m in WTB, my S1 lady takes care of everything involved with my packet. She sends the required paperwork including my leave form to get signed by the commander. Then she sends it all over to Waller Hall in order to get my orders processed. I was assuming I would have to do all of this myself, so this is a nice little relief. She also gave me my battalion clearing paperwork, so I can now get started on clearing…at least from battalion.

After S1, I headed up to our company and sat down with my squad leader. He had a transition counseling statement for me to sign. He had to go over each piece, but it basically said I will not be dragging my butt to get out of here. I’m guessing they’ve had problems with that in the past. I signed it and then drove home. I gave SPC Mac a call and we chatted for about an hour. Somehow I’ve now passed him up in this whole process. He was about a week or two ahead of me, but is now still waiting to be on TransProc.

I then worked on my schoolwork. When my wife came home we headed to my in-laws for dinner….it’s nice to know an actual date now!!!