Saturday: This weekend is a little messed up because of my CQ shift. I had plans to go to a "mud festival", but those had to be tossed. When I finished my shift at 0900, I took a shower and then went to sleep. I turned on my fan and put in my ear plugs. I slept until 1600, so most of the day was pretty much shot. I ended up going to the food court and eating lunch/dinner. I had plans of hanging out there a while with my laptop and using their internet to download a number of items, but the internet was down. I headed back to my room and watched some TV shows and doing SkillPorts between shows.

PFC Pickle called and wanted to meet up at the food court. I met him, but was still full from my big lunch…not too full to enjoy some ice cream though! We hung out for a bit, made some plans for Sunday and then went our separate ways. I went back to my room to do the usual…TV shows and SkillPorts.

Sunday: I woke up about 0830 and started laundry, then video chatted with my wife for a bit. After my laundry was done, I met up with PFC Pickle at the food court for lunch. After that we headed off to the National Museum of Korea. This is a huge building that we can see from post as it sits right on one of the edges of the south end of the Yongsan Garrison. We ended up taking a taxi to it because we weren't sure the best way to get to it. It was also extremely hot and humid out, so riding in an air conditioned taxi was a nice break from that.

The museum is free which is always nice, and it is huge! It had a number of pieces from early history in Korea. I found out that it is actually the 6th largest museum in the world in terms of floor space. It was pretty interesting checking everything out and when we finished there was a Korean folk dance performance going on. We checked that out for a bit before heading off to Itaewon. I had some shopping to do before I go on leave. We started walking, but because we weren't exactly sure how to get there and because of the heat we decided to hail a taxi.

Once in Itaewon I bought some souvenirs and we headed back to my room to drop it all off. We then grabbed some ice cream at the food court before heading to the theatre to see "Horrible Bosses". What a funny show!! I was laughing out loud and actually spit out my water at one point. It's a comedy about three friends who each hate their bosses and decide to kill them.

When I got back to my room I poured an entire bottle of Drano in my sink. It has never worked quite right since the "snake incident" a few weeks back. It randomly fills up with water and is always slow to drain. Every morning after I shave the sink will almost fill up and overflow. It then slowly drains away only to fill up and random points in the day. When this happens it brings back up the shavings from my face and then leaves them all over the sink. So it's been a pain in the butt to try and keep clean. After the "snake incident" I don't want to call building maintenance and have them try to fix it. The Drano seems to have done the job, I guess time will tell.

After another shower to wash away all the stickiness from the hot and humid day, I'll be going to sleep. 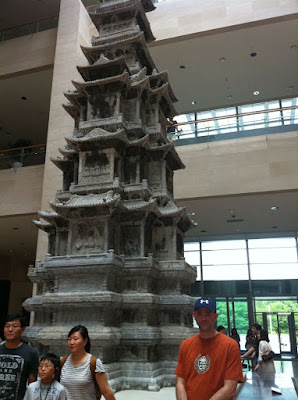 Hanging out at the National Museum of Korea 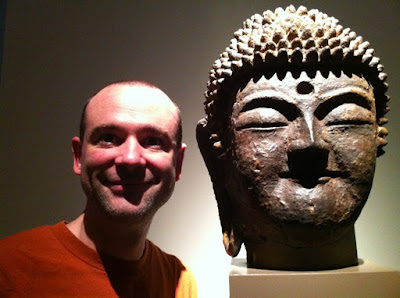 Me and Buddha at the National Museum of Korea