Saturday: I slept in until about 0930 and then video chatted with my wife and son for a while. I then did a SkillPort. I'm trying to do at least one a day, and many more if I get the chance. I then headed off to the Dragon Hill Lodge here on post. I was going to reserve a hotel room for a ROK buddy of mine, but all the rooms were full. My ROK buddy works in our ROK sister office and is currently serving his two years of mandatory service. His fiancé came up to visit and we had lunch…a very nice and cute couple.

I headed back to my room and took a nap. I don't know what it is lately, but I've been needing naps on a daily basis! After waking up I met up with PFC Pickle and we went to the theatre on post to watch Transformers 3. Even though I had already seen it, he didn't want to go alone and I thought it was good enough to see twice. We then went to the food court to eat dinner and have desert. I ate so much ice cream I thought my stomach was about to burst. I waddled back to my room and did some schoolwork before ending the night with some TV shows.

Sunday: I video chatted with my wife and did my laundry. I then worked on schoolwork before heading to lunch with the young hawaiian. We ate at the food court and then met up with an officer he works with. We all headed off to Walker Hill Casino to play in the free poker tournament. My first bet was "all in", I was either going to double my money or be taken out…I was taken out unfortunately. I had an Ace/King, but a guy with a pair of tens beat me. The young hawaiian and his officer fared better placing 9th and 10th, but you have to be in the top five to win the $100 each. Oh well, we had fun and it didn't cost anything.

We then headed to a nearby mall to have some dinner. Because everything is in Korean we are used to seeing a picture and pointing at it to order. This particular restaurant didn't have pictures on the menu, the only pictures they had were outside of the restaurant (which is what drew us in). Our waitress followed us outside and we each pointed to a dish we wanted…lol. The food was great! I love the fact that there are so many places to eat in Korea that don't cost more than $10. This dinner was only $5.50 and it was both filling and tasted great. Another perk is that you do not "tip" in Korea. So when something costs $5.50, that is all you pay. I'm going to miss that.

We then headed back to post via the subway. Another great benefit of living in Seoul Korea, the subway can get you pretty much anywhere and it's very cheap! When I got back to my room I kicked back, relaxed and I'm sure you can guess…..watched some TV shows. 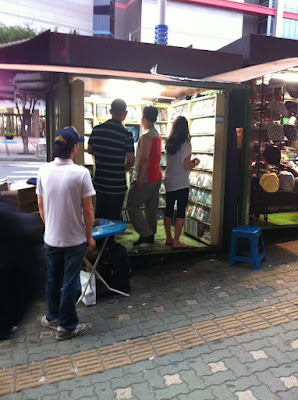 This is a street vendor selling pirated DVDs. They sell 'em really cheap and have all
the current hits playing in the theatre. The quality isn't very great, but still watchable.
It's crazy how this is just normal here.