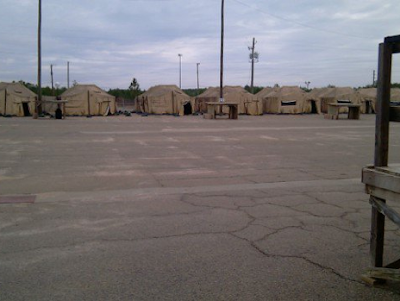 These are the tents that we slept in - Even through I was unable to bring
in a camera...there were others that did and I was able to have them
send me the pics.

Slept in today for as long as possible. Today our class and our sister class leaves to an event called "Capstone". This is an FTX (Field Training Exercise) event that includes a number of Fort Gordon AIT students with different MOSs. (I call it army camping) There are 25B of course, but the majority of AIT students there are 25Q which has to do with radios and communication. There were also a few 25N and 25U series as well. It seems that all the other MOSs deal with radios, satellites and other communications, where as mine deals mainly with computers and networks. We travel to a FOB (Forward Operating Base) and have some missions we have to do. I'm not too excited for it. I kind of like taking my showers each morning and sleeping in a bed each night. Maybe I'm just too old, but I don't really care to "rough it" these days. We'll see how it goes.

13:00 we had weapons draw. Everyone takes an M16 to Capstone. I ended up getting one assigned to me that belonged to a person who wasn't going to Capstone. The original weapons were assigned at the beginning of our M3 class, but as noted earlier I never received one. There end up being a lot of people who get out of going to Capstone all together. It's not a graduation requirement for our AIT as a 25B. People all of a sudden get sick or hurt themselves so they don't have to go. I would love to not have to go, but I'm not going to go to the extreme that some go to.

13:45 we waited on Centurion field with our packed bags. We were all given a packing list, but our roommate who had already gone to Capstone told us what we didn't need to bring on the list. So I ended up with one of the smallest bags out of everyone. I only brought the essentials.

14:30 the Capstone cadre pulled up in a big truck, came out and performed a shakedown on us all. We had to dump out our packed bags. They were looking for any contraband such as food or electronic devices. I had debated whether or not to sneak my phone in, but decided not to. I didn't know if there would be any time I would actually be able to use it.

15:00 we drove to the FOB. It's actual only about 5 minutes away from Charlie company. We actually ran by it a lot when I lived at RBK. The FOB is located on the way to Victory Hill…one of SFC Kent's favorite runs to do. Now I get to see it on the inside instead of just the big fences and the guard towers.

The base is actual built on a big parking lot. It's entirely fenced and has guard towers at each corner and at the main gate. There are speakers in the center of the FOB that play Islamic prayers throughout the day. I guess this simulates what it's like to be on a FOB in Iraq or Afghanistan.

We had chow which was similar to duty food in basic training. The food was hot and served up to us by all the MOS-T students in our group. After dinner we were divided up into 4 groups. Each group had a mix of students from each MOS. We were issued gear for our time here. An IBA (body armor), an ACH (helmet), elbow pads, knee pads, sleeping bags and eye protection for those who didn't have theirs from basic.

We were shown our tents we would be sleeping. They are big tents with a small heater/air conditioner in each one. Ours held 20 people in it all in cots that were lined up next to each other. We were told to sleep alternating the direction of our heads and feet to keep any sickness down.

We had some training on how the guards were supposed to check cars and people as they entered the FOB, then it was time to sleep. I slept really bad. The guard shifts were an hour each and although I didn't have duty, every shift change there would be a lot of noise as people would get woke up and then try and get ready. Sergeants would open the door and tell them to hurry up. I think I got about 5 to 10 minutes of sleep every hour through the night.

Today is also Halloween, but you would never know it being here. Everyone is dressed up as army men...lol. There are no trick or treaters and it wasn’t even mentioned. Funny how we can all be focused on training in this environment and the world just goes on around us. 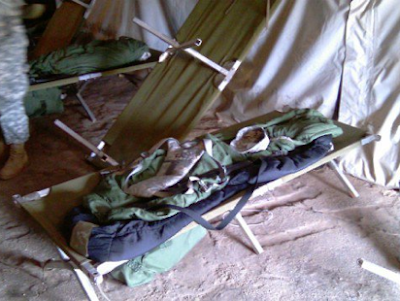 A photo of the cots we slept on. This was taken before everything was setup.
By the time we were finished, cots were lined up right next to each other with
just enough room to put your feet between them.