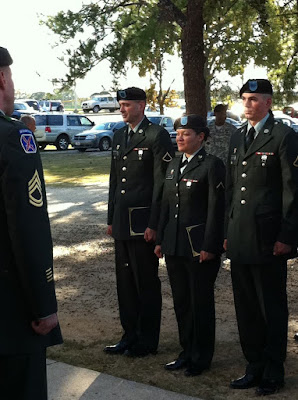 Right after graduation we formed up outside. I'm on the
left with two of the honor graduates to the right.

Today is graduation day…wow it's kind of hard to believe after all this time here, that I will be finished soon. The morning started off with the PT formation as usual. This time however, we were asked if we wanted to donate blood instead of doing PT. It's for a good cause and I wasn't feeling very motivated after the waste of time last night so I thought I would volunteer for it. I found out that because of my smallpox shot and because I've received a tattoo in Georgia within the last year, that I was ineligible to donate. So instead of donating blood I ate breakfast. Because I finished before the PT formation came back I was able to take a nice long hot shower as well…this day is going to be a good day!

I had a final out-processing brief at 9:00 in the morning. It lasted a couple hours, we had to show that we had all the required forms filled out and we also received our travel itinerary. It's starting to finally feel real that I'll be leaving here soon! Those who didn't have all their forms, or need stuff fixed were given until 15:00 to get it all done and then get it back. Mine was good to go, so I was able to get signed out.

We then had graduation practice at noon, so we marched over to our battalion HQ. Practice started off pretty rough. It seemed nobody including myself could get the timing down and the movements right. I ended up being the "distinguished honor graduate" because I was the top of both our classes that were graduating. This had me being first in line and leading everything. We ran through the process over and over again until about 14:30 when we had a break until 14:45. The ceremony began at 15:00 and went pretty well. There were only a few mistakes such as the sergeant mispronouncing a couple of the honor graduates names. He messed up one so bad it took everything I had not to bust out laughing. The ceremony started off with a couple of speeches and then had me going up to the front of the stage after a short video showing what signal soldiers are. Once there, the sergeant read off what the distinguished honor graduate is and then named me off. I then shook hands with the top brass of our company. I received a battalion coin as well. The honor graduates (three in total) were then announced and after that each person came up in alphabetical order and in turn announced their rank, name, and where they were going. We then marched outside and a number of NCOs and other officers came through and shook our hands and congratulated us. After this we were done…finished…graduated!!!!

We were told that S1 closed at 17:00, this is the last stop of our out-processing, so PFC Metal and I hurried up to our barracks and packed everything up. Once it was all packed we were signed out of the barracks after a quick inspection of our lockers so make sure we wiped them down. We then headed to Ops to get signed out there. We had to get a few documents signed and read a safety message out loud to the NCO before he would sign our paperwork. Lastly we headed to S1 where our leave paper was signed. Free…Free…We're finally free (at least temporarily)

We went to our hotel room, I took a shower and then changed into civilian clothes. Once changed we met up with PFC Metal and his wife at PF Changs to celebrate. The food tasted better than ever. Good company, good food, good beer…a great way to end the day. 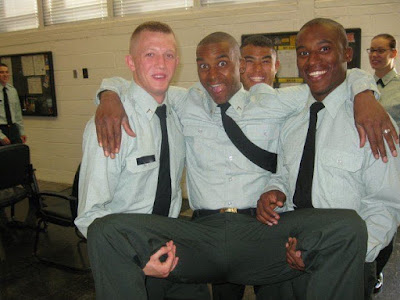