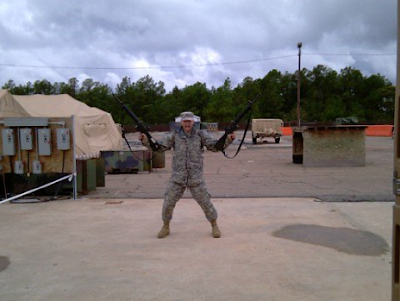 4:00 AM wake-up this morning with formation at 4:45, then breakfast. Today we left to the range to zero our rifles. It kind of sucks because it has been raining on and off all night with a sprinkle every now and then during the day. We took the bus to the range and at each station there was a big puddle of water for us to lay in. Grrrrr. When it was my turn I fired each of my three shots then went up to the target to see how I did. Unlike when we were in basic, we didn't do any adjustments to the sites. I think the cadre here just wanted to push us through…and maybe get us used to actually shooting the weapon again.

We then bussed to another range where we divided into two groups. One group would perform combat first aid on a dummy, while the other group would actual fire at pop up targets. When firing at the pop up targets we would do it from four different positions and each position we would also change which side we would shoot from, so we would shoot right and left handed. We also had a sergeant next to us screaming shoot 'em shoot 'em shoot 'em!!!! I guess all this made it seem a little more real. I did OK with my right hand, but I need some work shooting left handed. We shot kneeling, standing and sitting.

After the range we were bussed back to the FOB where we cleaned our rifles under the clamshell. We spent a long time cleaning them too. I can guarantee that mine is much cleaner than when I received it. Anyone who took their rifle to the sergeant to check it was told it needed just a little more cleaning. I never even took mine up there because I knew no matter how clean it was…it would still need a little more cleaning. I just kept cleaning until it was time to eat dinner.

After dinner we did some rehearsal for our induction ceremony that we will be doing tomorrow. The induction ceremony is done at the end of Capstone to induct the soldiers into the Signal Corps. We basically stand at either attention or parade rest and recite the soldier's creed, sing the signal corps march, and sing the army song. After that we get our signal insignia pinned on us.

We turned in all of our equipment except for our sleeping bags. After that we broke into groups and cleaned up different areas of FOB Dunham.

22:00 to 23:00 I had guard duty with PFC Metal. This time we were assigned to one of the ECP (Entry Control Points) a gate where cars can access the FOB. It has two little guard huts that we stood in and hung out for an hour until our relief came. This time I was able to go to sleep because I didn't try and go to sleep before the shift. 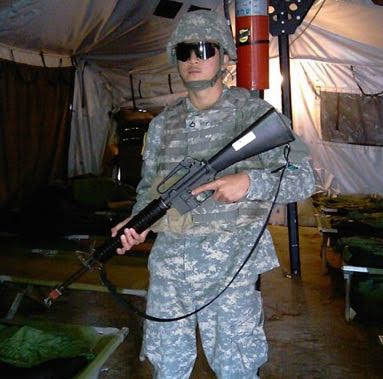