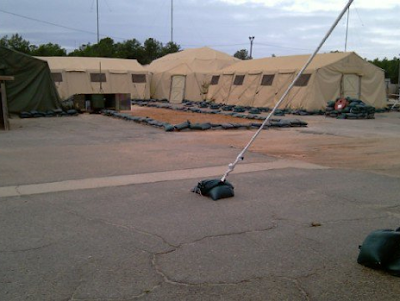 The Dome - This is where the folks at FOB Dunham setup their radios
and network to talk to FOB Willard.

3:30 AM Wake up…it was early this morning and our formation is at 4:00 AM. Everyone in the brigade has to get the flu shot and even though we are on the FOB we are not an exception. We formed up and then boarded a bus that took us back to the gym next to Charlie company. (I never thought Charlie company would look so good). We had to fill out a short questionnaire then we got in line for the flu shot. Because I had the smallpox shot within 30 days I had to get another shot. The small pox vaccine is a live virus and the flu shot is given in either a mist up your nose (which has a live virus) or a shot in the arm with a needle (which does not have a live virus). Since I already had a live vaccination I had to get the shot. Most people got the spray up the nose.

We bussed back and ate breakfast at our FOB DFAC. OMG it's so freakin' cold here in the morning and at night. Everyone is dancing around because they are freezing. Even with my gloves on, my fingers are getting so cold they are going numb. The cold seems to go right through my boots as well. I guess I should've worn my winter boots, but I didn't think it would be so cold yet. It is really making life on the FOB a miserable experience.

We did some more battle drills, then we left on our "mission". From FOB Dunham our unit left and marched down a some side roads. Our mission was to go to an "Afghanistan village" and search for a weapons cache. During the march we found an IED and reacted accordingly. Later on we were ambushed by the enemy. The enemy consisted mainly of the MOS-Ts that were part of our class. Our unit came along an IED, but nobody saw it. So the instructor said the first squad was all dead. Then a machine gun started firing. We all posted 360 degree security, but with the first squad dead we ended up having a big hole in our 360 degrees. We all ended up dying. The instructor actually said we had the distinct honor of being the worst class he's ever seen on this ambush. He was pretty pissed off.

We regrouped and resurrected everyone for the march on to the village. We arrived to the village and it was chaos. We had a plan, but I guess it was a little too complicated for everyone. My group ended up clearing a room and the first guy went in the wrong way, I went in after him and had to go the opposite way. I ended up getting shot pretty quickly. I had to lay down and play dead in the room while listening to everything that was going on in the village. Everything was a little out of control. When it was all over the instructor said there would be some people going to jail because one person shot and killed a pregnant woman who was unarmed. Another person shot a guy in the back who was unarmed. It's a good thing this isn't our MOS or else we would all be screwed.

We were bussed back to the FOB and I jumped off at FOB Dunham while the rest of the group was taken to FOB Willard. I had my makeup appointment today, so I had to call the duty van and hope they would come pick me up this time. I ate an MRE for lunch and then waited for the duty van. 1.5 hours later I was still waiting, it was starting to look like a repeat of last time. I was wondering if the sergeant at operations even called the duty van, they seem to be put off if anyone has to leave the FOB for appointments. I guess this is because so many people try and get out of going to Capstone. As I was just about to give up hope a duty van pulled up and dropped a couple of people off. It was the brigade duty van and not the battalion duty van, but I didn't really care. It would serve my purpose so I jumped in. They gave me a ride to Charlie company where I dropped off my weapon. I then took a taxi to the hospital where I could order my glasses. I waited there for 2.5 hours! This place is so slow, but it is warm and the TV had CNN on so I wasn't complaining one bit.

I got my glasses ordered, but found out I couldn't order any civilian glasses because I graduate too soon. This is one of those things that piss me off. I wish Ft. Gordon would give every student a list of things they need to do before they can leave. The only way I find out about half the stuff is by word of mouth from other students. I would've ordered my glasses during the software portion of our schooling because the schedule had us start so late in the day.

No worries though, I got what I needed done and I also had a grande mocha from the Starbucks downstairs at the hospital. I got a taxi back to Charlie company (I could have called the duty van, but who knows how long it would have taken). I took a quick shower and grabbed all the cold weather gear I could find and put it all on. I then called the duty van and waited to be picked up to head back to the FOB. I had a major headache, so while I was waiting I took a crap-load of Excedrin. I was planning on giving my wife a quick call, but my phone was completely dead…bummer.

Headed back to the FOB in time for dinner and then after some briefs and training we went to sleep. Another long day, but I feel clean and a little refreshed since I was away for about half of it. I also do not have any guard duty tonight so I should get some good sleep as well. 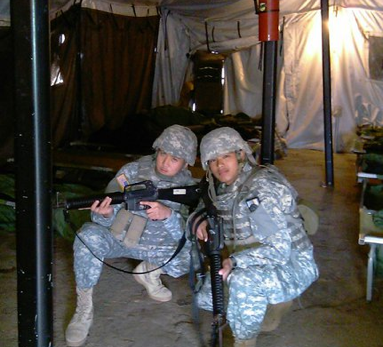 The young Hawaiian (left) and his battle buddy in their tent.