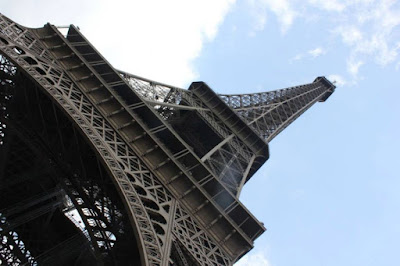 Looking up at the Eiffel Tower

This Memorial Day weekend my wife and I headed to Paris with SPC Mac and his family. We took the train to Paris and ended up taking a very expensive taxi ride to our hotel. SPC Mac's wife put the whole vacation together, so I can't complain…we were just along for the ride. I wanted to make sure we went out and did something fun on our last four day weekend here in Germany. Our hotel was outside of Paris situated between Paris and Disneyland. We spent the evening unwinding in the hotel and then we each enjoyed a couple's massage the next morning. We watched SPC Mac's son and his friend until they finished, then we headed into Paris. I've been there once with my kids, but still had a few things I wanted to see. With the two little kiddos we didn't make it very far though, we hung out mostly around the Eiffel Tower and waited until it lit up at night before we left...a pretty cool site to see!

The next day was Disneyland! We took the train to Disneyland which has a stop almost right outside the park's gates. We had a lot of fun checking everything out, but the lines for the rides were a little outrageous. We hit some good rides though and had a lot of fun in the process. The park is setup very similar to the magical kingdom in Orlando and Disneyland in California. We were going to wait until the fireworks at night, but ended up only staying until after the parade and then took off. The two boys were pretty worn out…as were all of us adults!

The last day was filled with our trip back to Germany. France is a place I'm glad I have been able to visit, but I have to say that the people just aren't as nice as a lot of the other places we've visited. The French just have sort of a different (kind of rude) attitude that I will not miss. Both SPC Mac and I did this trip off the books. Neither of us put in a pass to leave the country (because of all the hassle) and both of us were a little stressed when trying to catch our train back to Germany. If there were any problems we could have both been in quite a bit of trouble. Luckily everything went well, everyone had a great time and I'm glad we were able to do one last big event before leaving.

Check out the slideshow below, or check out my Flickr album:
Edit: I had a lot of pictures in a Flickr slideshow album, but Flickr deleted it when they switched to a limited free option. I have all the originals, but haven't put them back up on the blog unfortunately.