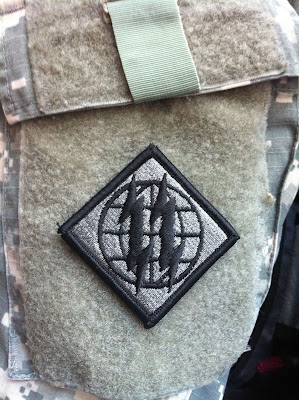 This morning we both woke up early again around 0500. My wife is still sick and we are both trying to adjust to the time difference. We had coffee and I poked around on the internet for a bit before having breakfast. I have to say that living with my wife once again is really wonderful. I hated being alone in Korea for so long. I'm really looking forward to spending my time here in Germany with my wife.

I met up with my sponsor at 0830 and we headed off to the central in-processing where I received a schedule of appointments that I need to make. I then met up with the finance guy to get all my army finances in order. I will lose my housing allowance and some other things such as the family separation pay & Korean COLA, but I will be gaining the German COLA as well as some one time reimbursements for travel to the airport and the travel to drop off my car to get shipped while back in Washington.

We then headed to the company to drop off copies of my PT card and weapons card since I didn't have those yesterday. We then went to S3 and did some more in-processing. After that we headed to housing and picked up keys to two different housing units. We picked up my wife and checked out the units. They are both in Patrick Henry Village, but are very different as far as the interior. One of the units had been remodeled and looked much newer, while the other with the same floor layout looked much older and dated. The choice was pretty easy and we headed back to the housing office and signed the papers for the updated unit. We were also able to order the loaner furniture which will arrive on Wednesday next week. We have an inspection scheduled for that Wednesday morning and we will have to check out of our temporary housing then as well.

We then headed to the food court for lunch before heading over to check out the costs of internet packages in for our unit. Interestingly they package their internet with phone or with TV & phone, but no internet only package. We are thinking about going without the cable package and just using the computer for our entertainment needs.

We headed back to our room about 1430 and called it a day. My wife took a nap and I laid down for a bit, but was unable to sleep…a headache was just too much. The rest of the night was pretty laid back…just watching a few shows and taking it easy.