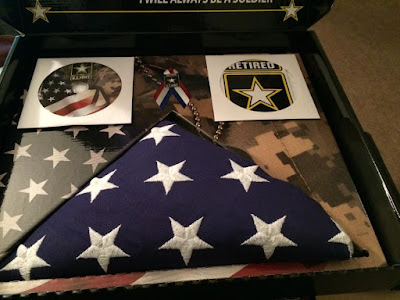 Put on the uniform for the last time today...here is the flag I received as my parting gift

I woke up at 0700 and casually got ready, the same as yesterday…except as I put on my uniform I realized this would be the last time I would be doing so. It all seemed a little surreal. I headed to Ft. Lewis at 0800 and went straight to Waller Hall. I arrived at the transition center a little before 0900 when they opened up shop. I signed in and waited about 10 minutes before being seen. The same guy I spoke to yesterday was helping me. I had given him all my paperwork yesterday, so he had everything ready. I could tell today was going to be a better day than yesterday.

I took everything and drove to the WTB parking lot. Once there I headed to the SFAC and made copies of my DD214. The DD214 is a very important piece of paperwork. It’s the certificate of release or discharge and pretty much shows the entire army career compressed onto one sheet of paper. It’s used a lot after the military to prove your service and apply for things like veteran’s preference in job applications.

I then went to the barber and got my haircut…the no maintenance cut (a bald head…my usual). After that I had lunch, a slice of pizza in the hospital food court. Finally I headed to my VA exit interview, which turned out to be a group exit interview with about 7 of us. We went into a small conference room and the VA rep basically just answered everyone’s questions. We found out usually 90 days after our final day in the army (the last day of terminal leave) is when we should start receiving our pay from the VA. After the brief was over, everyone handed him a copy of their DD214s and then took off. I drove to my brother-in-law’s restaurant to do a little network consulting for him.

I then went home, met my wife and then went to my in-laws for dinner. After that we went home and I did schoolwork.